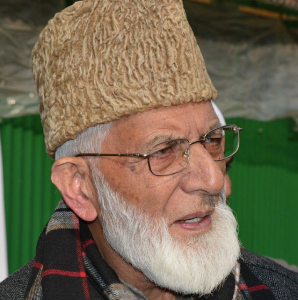 Syed Ali Geelani, a longtime leader of the independence struggle in Kashmir, was permanently booted from FB after posting about the young man executed by Indian soldiers on July 8th. His name & photo may not be cited on FB though his funeral was attended by 600,000 people. Did FB consider that “fake news”?

Though axed on FB, he remains active on Twitter & is an important source of information about the occupation & current murderous siege.

There’s something powerful about him including reports on the scorched earth genocide being carried out now in Arakan state, Myanmar by the military junta against Rohingya Muslims. A Kashmiri activist reaching out in the midst of siege to express solidarity with Rohinga under siege would be the very heart & soul of human solidarity.