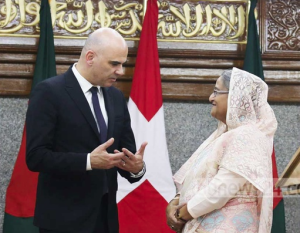 Rohingya refugees in Bangladesh are protesting against their forcible deportation back to the killing fields of Burma. But Bangladeshi prime minister Sheikh Hasina can’t manage the sweatshop economy & over a million refugees at the same time. To counteract Rohingya opposition, she must be orchestrating this parade of politicians coming to visit her from around the world to offer their support for the deportation plan between Bangladesh & Burma’s genocidaires. It’s an insane plan to deport refugees whilst the Burmese army & vigilante death squads are still torching villages & Rohingya refugees are still fleeing for their lives. But instead of demanding that governments around the world provide massive humanitarian assistance & asylum with visas & full refugee rights, Hasina is going to deport them to Burma or to an uninhabitable island. That way she won’t jeopardize those trade & sweatshop contracts based on child labor that Bangladesh has going with so many countries.

One of the latest to show up was Switzerland’s president Alain Berset. He talked trade with Hasina, expressed concern for Rohingya refugees, commended Bangladesh for its “solidarity, assistance, & protection” for the refugees, made the obligatory photo op visit to Cox’s Bazar, & pledged 12 million francs ($12.7 million) for the refugees on top of the 8 million francs ($8.5 million) pledged last October. Not to seem ungrateful, but Switzerland is one of the richest countries in the world. Twenty-million francs is chump change from the petty cash drawer–if in fact any of it was actually dispensed. Countries pledge & often don’t dispense.

Berset also commended the forcible deportation plan as a “positive step toward a solution to the current crisis.” “Current crisis” is his euphemism for genocide but if you’re promoting a forced deportation plan it wouldn’t be advisable to use that term. Feigning humanity he does not possess, he said, “it will be important that all returns are voluntary, safe, & carried out in dignity.” Maybe on his photo op visit he didn’t see or hear Rohingya refugees demanding that they not be forcibly returned.

One final question: to how many Rohingya refugees has Switzerland offered asylum? Do we hear the sound of zero, zip, nada, zilch?

Stand with the Rohingya people. Demand no forced deportation & asylum in any country they choose with visas & full refugee rights.

(Photo of Berset & Hasina from bdnews24)