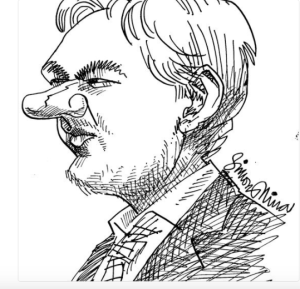 The chief prosecutor in Sweden announced that the rape investigation of Julian Assange has been dropped though she insisted that based on evidence there remains probable cause for prosecution. They are not declaring Assange innocent but felt they could not pursue the investigation because the government of Ecuador, which gave Assange asylum in its embassy, refuses to cooperate. Sweden has exhausted all possibilities for prosecuting him but if he returns to Sweden before 2020 the investigation can be reopened.

There is an international chorus of those who insist Assange was framed for rape charges in Sweden, that they were simply a ploy for the US to apprehend Assange for Wikileaks revelations. How they know that has nothing to do with evidence they possess but with conspiracy thinking combined with political naiveté or more likely misogynist conviction that the women accusers must have been lying. That’s a contemptible cliché in rape cases, especially in accusations against famous people. But he & his supporters also deftly manipulated the situation to conflate the political campaign against Wikileaks with the rape accusations.

Despite his sleazy libertarian politics on Syria & Russia, Assange should be defended against US prosecution for Wikileaks revelations. You don’t have to like the guy or consider him a hero to recognize the importance of his case which is an entirely different issue than the rape charges.

The Swedish courts could have given Assange a chance to confront his accusers & quite frankly if he is innocent he should do everything in his power to prove so. Now he will proceed through life surrounded with suspicions & if women are wise they will take precaution around him.

(Caricature of Assange by Simon Ellinas)