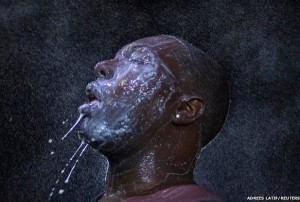 This extraordinary photo was taken in Ferguson last August at a late-night protest against the murder of Michael Brown. This man was among protesters yelling at the cops & was targeted by them with what looked like pepper spray. They maliciously got him right in the face. His friends immediately pulled him into a nearby parking lot to treat him by flushing the pepper spray with milk.

We have seen this kind of violence against protesters all over the world; the only way to put an end to it is to make protests massive & mighty. Regimes around the world have completely abandoned Barney Fife-style policing for a SWAT team approach because they have no solutions to the global crisis of capitalism except austerity programs & repressive policing. The erupting civil rights & Black power movement is particularly threatening because it shakes the very foundations of their control including military policy which is rooted in racism & divide & conquer strategy between working people to keep us hating on each other rather than directing our outrage at them.

They are accustomed for decades now to using SWAT team policing in the Black community & don’t know how to operate any other way. Just as the Civil Rights Movement of the 1960s put an end to extreme violence like water cannons & attack dogs, the new movements around the world will have to put an end to police assaults on the right to free speech & assembly.