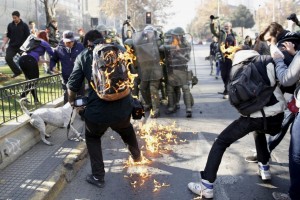 Students & teachers in Chile have been protesting for at least a decade for education reforms–often in pitched battles with riot police over the right to protest. The government isn’t building new public universities & profit in higher education is the norm–debarring thousands of working class kids from getting a college education. The protests include thousands of high school students because public education is being replaced by charter schools, a neoliberal method to undermine & destroy public education.

The system, which had been universal, free public education, was privatized & deregulated under the dictatorship of General Augusto Pinochet when Chile became the testing ground for Milton Friedman’s antisocial, scorched earth neoliberal assaults on social & public services for working people. Education became a consumer product & not a social right. The policies remain in place, administered by successive “democratic” regimes after Pinochet.

Both high school & university students want education brought under control of the central government rather than by municipalities. Municipalizing education was neoliberal strategy & created wide inequalities in education based on unequal funding resources–not unlike segregated education in the US. In fact, one Chilean NGO termed the system “educational apartheid,” among the most unequal education systems in the world.

The current Chilean president Michelle Bachelet is a socialist of the French president François Hollande kind (who discredits the designation every time he opens his damn mouth, deports entire communities of Roma, or prevents refugees from entering France). She was elected in 2014 based on promises of education reform which she didn’t deliver in her first term of office from 2006-2010.

In the same way as Hillary Clinton, Bachelet played the populist role to the hilt during the election campaign, even promising to trim the sails of neoliberalism. She promised to re-centralize education, make it free again, & financed by corporate taxes. File that under “A Snowball’s Chance in Hell.”

Last February, Bachelet enacted an education reform law. Like all such legislation that tries to pull the wool over people’s eyes, it was full of loopholes, stalling tactics, promises for future programs to correct the problems not addressed, even education vouchers like the right-wing is trying to install in US education. What the legislation doesn’t do is dismantle neoliberal education & replace it with free, universal public education.

Former student leader, now legislator Camila Vallejo, who will chair the education commission in the Chilean legislature, supports Bachelet’s program as a gradualist & pragmatic approach. Some other observers call the new legislation a partial victory showing how popular movements can gradually transform state policy & how difficult it is to dismantle the neoliberal model of education. It wasn’t difficult to install the model under Pinochet. Why does dismantling it have to be gradual? Or will that bring students into conflict with the neoliberal political forces that really run Chile?

Sometimes social movements do have to accept partial victories; In fact, that’s the norm. But one should not look at a dissembling piece of legislation meant to deceive & demobilize the social movement of students & teachers & call it a partial victory when it’s a massive con job.

The same political forces trying to cover for the treacheries of Dilma Rousseff in Brazil by discrediting social protest of millions against her are operative in Chile: small-minded political thinkers who think when politicians talk a good game they mean business.

This photo is a protest in Santiago of students & teachers not persuaded by that partial victory baloney. The protesters were hit by a petrol bomb in a conflict with riot cops.