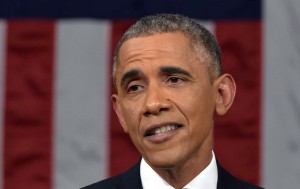 In an attempt to be inspirational he spoke of equality. But his words are so at odds with his deeds–& now he gets to blame it all on the Republicans. What a bait & switch operation it all is.

Let’s do a simple fact check on his claims the economy is growing. (Though, to be fair he never did say who it was growing for.) If employment levels are looking so good why are food banks around the country reporting soaring demands for food assistance? Is it because the new minimum wage jobs don’t cut it if you want to have housing & eat too? Why are schools having to deal with starving kids before they even start the day’s lessons?

A little over two years ago the government cut the food stamp program $5 billion across-the-board & are gradually implementing $6 billion more cuts through 2016. Through all sorts of new restrictions which have nothing to do with hungry kids, they expect to cut food stamp recipients by one million hungry people. Such is the character of Obama’s compassion. He could try to blame this on the Republicans too but the cuts were implemented in 2013 when Democrats were the majority. So much for that baloney.

And one last point about that speech. It was a masterpiece of xenophobia. At what point do you grow up & realize the US is not the be-all & end-all of human civilization? Or is neoliberal barbarism just not capable of making that judgement? (PS: it isn’t & it’s gotta go.)