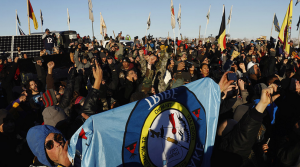 This is the scene today at the Oceti Sakowin encampment in North Dakota with Standing Rock Sioux & “water protector” activists from around the country celebrating the announcement that the US Army Corps of Engineers & Obama administration have backed off routing the Dakota Access Pipeline under Lake Oahe. The Standing Rock Indian Reservation is on the western shoreline of Lake Oahe.
Lake Oahe is actually a large reservoir created by the Oahe Dam on the Missouri River. The US Army Corps of Engineers began constructing the dam in 1948 to provide electric power; it began generating power in 1962. The dam’s power plant now provides electricity for much of the north-central US.

Oahe was one of five dams the US Army Corps built on the Missouri River in that period which flooded out & forced thousands of Native Americans to relocate on their reservations. Over 200,000 acres of the Standing Rock Reservation & the Cheyenne River Reservation in South Dakota were flooded out just by the Oahe Dam. So the Dakota Access Pipeline is not the first time the sovereignty of the Standing Rock Sioux & other Native American tribes has been violated by the US government in the Dakotas.

Last week the US Army Corps of Engineers ordered the dismantlement of the solidarity camp by tomorrow, December 5th, but it was clear the Standing Rock Sioux & solidarity protesters had no intention of leaving & were going to stand their ground. This decision to reroute around Lake Oahe is an important victory if it sticks & if it is not just an end run around tomorrow’s expected confrontation. Media in Fargo, North Dakota reports that the reroute decision could be reversed when Trump takes office in just over a month. No one wants to be a wet blanket on celebrations but this may be a stalling tactic by the US to head off the showdown & disperse the massive force of solidarity in North Dakota.

The pipeline begins in North Dakota but it still has 1,172-miles (1,886 km) to traverse through South Dakota where it well may again conflict with Indian sovereignty, will cross through private farmlands in Iowa where farmers will certainly protest the imposition of eminent domain, & also through farmland in Illinois to its terminal. In Iowa it will also cross under the Mississippi River & there are already protest encampments being set up.

The usurpation of Indian rights & environmental damage by the pipeline company & the US government is not likely to make the Dakota Access Pipeline an event-free enterprise. The struggle may have just begun.