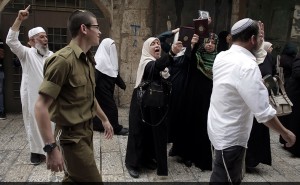 A propaganda pivot for justifying US intervention into the Middle East is the need to rescue Muslim & Arab women who are passive in the face of violence & abuse from men. They didn’t just develop that narrative for Afghanistan. It’s long been central to violence against Palestinians. It’s a twisted use of feminism orchestrated by Zionist crackpots like Phyllis Chesler, an American feminist who used to write unreadable tracts on psychology & now writes mountains of rancid tracts against Palestinian women. Her sisterhood ain’t that powerful compared to her sense of Jewish superiority.

Unfortunately for Chesler, she’s being exposed as a blowhard by Ahed Tamimi, the 13-year-old Palestinian girl & countless other women & girls who repeatedly stand up unarmed to Israeli soldiers in the West Bank–& here in this photo by women at Al-Aqsa mosque in East Jerusalem protesting an Israeli blacklist preventing 40 Palestinian women from entering the mosque because they “cause trouble & damage.” Israeli police are allowing other Palestinian women to enter after presenting identity cards.

Special Israeli police units erected metal barricades against the women to prevent them from entering & against their protests when police usher Jewish extremists into the mosque to tour & worship–which is expressly prohibited by an Israeli agreement with the Islamic Endowment that runs the entire Al-Aqsa compound. Non-Muslim worship is forbidden at the site. Of course if the women were all that passive, metal barricades & special police units would not be required.

Here Palestinian women & men shout slogans & hold up the Quran protesting the blacklist & the admission of Israeli troublemakers. So much for that misogynist narrative about Arab women!

Build the economic, cultural, & academic boycott of Israel & demand no aid of any kind to apartheid Israel.