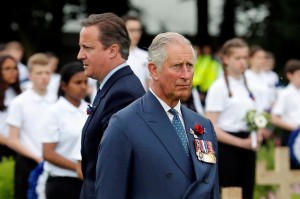 This is Cameron & Charlie the Mooch putting on long faces to impersonate mourning at the centenary ceremony in France marking the WWI Battle of the Somme begun July 1st, 1916. It was fought on French territory by the French & British armies against the German army & was one of the largest & deadliest battles in human history. When it ended in November 1916, over a million soldiers were killed, wounded, or missing from all three armies.

Every Tom, Dick, & Harry from the British aristocracy was there with the long faces, standing with heads of state, politicians like Jeremy Corbyn, the Archbishop of Canterbury, orchestras, choirs, military bands, & schoolchildren they want to inculcate with the mythology about WWI being fought over democracy when it was fought primarily by the US & Europe over the colonial division of the world.

WWI was a monstrous war we’re taught to honor when it should be understood & condemned as setting off the militarism & endless wars that have marked the last 100 years & made the lives of millions of people a living hell. There was nothing emancipatory nor democratic about it.

Do people like Cameron actually believe we’ll buy the sad face schtick when they continue the barbarisms of WWI in Afghanistan, Iraq, Yemen, Bahrain, & elsewhere? Do the mutant Windsors actually think we’ll buy the feigned sorrow when they had to be dragged away from the horse track & forced at gunpoint to attend?

There is nothing to honor about the Battle of the Somme. It was a catastrophe whether the men who fought it understood that or not. The only reason Britain & France are putting on this dog & pony mockery is to maintain the image of war as a noble pursuit that young people should be willing & eager to participate in not just as a patriotic duty but as an honor.

The historic imperative remains: rebuild the international antiwar movement to put an end to endless wars that have taken the lives of millions of people–soldiers & civilians.