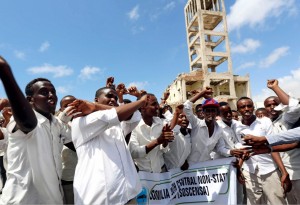 These students & activists in Mogadishu, Somalia are protesting the illegal poaching operation of Italian fishing vessels in Somali waters. For years, all we read about was the threat of Somali pirates to international shipping by hijacking ships & demanding ransom for their return. But much of the “piracy” was directed at foreign vessels over-fishing Somali waters & destroying the livelihood of local fishermen.

Somalia is located in the Horn of Africa on the Gulf of Aden entering the Red Sea leading to the Suez Canal–a major international shipping route with an estimated 25,000 ships transiting annually to the Suez Canal. Its strategic location in Africa & in proximity to the Arabian Peninsula has given it special importance in colonialism (it was both British & Italian colonies), in the Cold War conflict between the US & Soviet Union, & in modern neoliberal plunder. And of course, the US claims it is now an “Islamist” & Al-Qaeda stronghold to justify drone bombing the country. If you look at a map, you can see it forms something of a military phalanx (including Israel, Egypt, Iraq, Yemen, & Bahrain) for advancing US military interests in the Middle East.

The World Bank & IMF have been there since the 1980s jacking around their economic & political life & prepping it for the devastation of endless US military incursions. Those barbaric incursions were glorified in the book & film “Black Hawk Down” about a battle between the US & Somali forces to portray colonial depredation as battlefield glory. (Those familiar with WWII movies will know the score.) For no apparent reason other than racism & to create a primitive image, local political leaders in Somalia who oppose US incursions are referred to as “warlords.”

According to a 1997 Greenpeace report & other investigations, Swiss & Italian companies brokered for European companies dumping hazardous waste in Somali waters. They worked with corrupt Somali government officials & other criminal elements called “warlords” to dump the waste in coastal waters or bury it along the coastline. According to that report, just between 1994 & 1998 there were over 10 million tons of hazardous waste dumps, including radioactive material. The Ecologist journal reported in 2009 that since 1991, 35 million tons of waste had been exported to Somalia in exchange for $6.6 billion dollars to government officials & “warlords.”

Somali pirates originally formed as coastguard militia to protect fishing waters from foreign vessels taking advantage of the anarchy & chaos created by World Bank & IMF plunder & US military incursions to illegally fish & dump toxic waste. Media often refers to them as vigilantes but when the US destroyed the Somali government, that included an effective coast guard to protect Somali waters from poaching & toxic waste dumping. Of course what really rankled the US & European regimes about Somali pirates from the outset was their armed self-defense against colonial depredations. Such a thing could easily get out of hand & turn to effective armed insurrection against the US military.

From available reports, which are often laden with racism & vested interests, it’s hard to tell what is going on with Somali piracy today. With millions of ransom extracted on hijacked ships (an estimated $1 to 2 million per boat), it’s likely bigger forces of Somali & foreign capitalism got involved. Pirate fleets are now reportedly equipped with rocket launchers, GPS systems & satellite equipment & you have to ask who is supplying that equipment. Reportedly the insurance industry for shipping has found Somali piracy quite a bonanza by jacking up the premiums.

It’s estimated that Somali piracy employs thousands who go to sea, repair boats, supply food but they’re still coming out on the short end. Somalis may collect up to $100 million annually from extracting ransoms on hijacked ships but European & Asian trawlers poach an estimated $300 million annually in fish from Somali waters.

The US & European Union navies run counter-piracy operations in the Gulf of Aden & have arrested dozens of Somalis who get prosecuted in European & US courts & are handed draconian sentences. Since colonialism has destroyed the court & legal system in Somali they are tried in Germany, France, Italy, the Netherlands, Yemen, Belgium, the US where they can’t possibly get a fair trial.

Justice demands we stand with the students & activists in Mogadishu not just in opposing poaching & waste dumping but in demanding the US get the hell out of Somalia–lock, stock, & bomber.