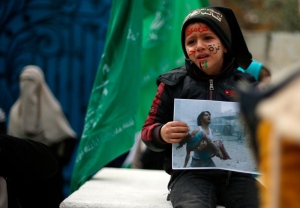 There have been rallies around the world in solidarity with east Aleppo but none seem as poignant or powerful as the one yesterday in Gaza city.

This little guy who is six or seven years old is nearly old enough to have lived through three major Israeli bombing campaigns over Gaza: December 2008-January 2009; November 2012; the summer of 2014. Human rights organizations cited Israel for directly targeting not just civilians, but children.

Hundreds were killed, thousands were injured, many of them permanently disabled. Schools, hospitals, residential areas, markets, ambulances, even UN refugee centers were bombed to smithereens. Four little boys on the Gaza beach were gunned down by bombers. So if anyone in the world understands the profound suffering in Aleppo, it is Palestinians in Gaza.

Over a million people around the world marched in 2014 in outrage & solidarity with Gaza, including solidarity marches in occupied Kashmir.

There’s too much suffering in the world during the barbaric phase of capitalism. The only way humanity can take control & end these monstrous crimes is by standing with the oppressed as brothers & sisters.

The iron law of social transformation will always be “an injury to one is an injury to all.” That is the way activists in US history expressed the law of social transformation but there are likely more powerful, more poetic expressions from other cultures. Please tell us here how your traditions have expressed this universal law of human solidarity & profound mutual respect.