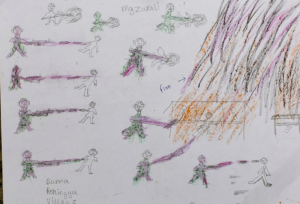 Last year, a small cult called Socialist Action (SA) wanted to tour Vanessa Beeley along with Eva Bartlett but Beeley was otherwise engaged with Assad officials in Syria. So SA only toured Bartlett who believes extraterrestrial reptiles in the form of Jewish bankers run the world. Now Beeley is actively campaigning to associate the Rohingya people with Saudi-based jihadi terrorists, is actively supporting the fascist Burmese junta, & is engaged in denying genocide against the Rohingya.

How did such a political corruption take place in SA? Be assured it wasn’t overnight but a steady, slow progression from sectarianism to the abandonment of international solidarity to alliance with fascists & counter-revolution in Syria. It is nearly impossible to find any articles written by SA about the Arab Spring, the Palestinian struggle & BDS, Kashmir, the US wars, the Rohingya, or even Syria that isn’t apologetics for Assad. One member wrote a lengthy defense of Assad stringing together a mountain of quotes by Lenin with no analysis nor even mention of Syria until the last sentence. It isn’t just an SA phenomenon nor a US phenomenon but is played out across the world in the antiwar, Palestinian solidarity, & socialist movements. SA’s kind of socialism is dead & good riddance to them. Regrettably, the opposition to them is not entirely cogent since many include supporters of US humanitarian militarism.

The politically corrupt Assad supporters are using their influence (such as it is) to associate the Rohingya with terrorism. The liberal radio station KPFA out of Berkeley (affiliated with Pacifica & WBAI in NYC) had an interview–shared by Beeley on Twitter–titled “Genocide” in Myanmar? Think again, which promotes the fascist point of view.

So who are we to believe? Islamophobes, anti-Semites, & fascists? Or the judges & genocide scholars of the International Peoples’ Tribunal who found the Burmese junta guilty of genocide? Or the voices of Rohingya refugees like the child who drew this picture of what they witnessed & experienced in Arakan state?