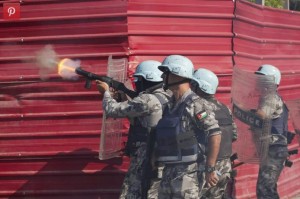 The MoveOn petition to deploy UN troops to Palestine is such an affront  for sheer recklessness in putting Palestinians in harm’s way–& not just recklessness but temerity since Palestinians have not requested such an intervention.They already have an occupying army.

Did people miss Ban Ki-moon’s collusion with Israel in Operation Ethnic Cleansing? Do they think that just Ban’s personal failing rather than UN policy? But what about the role of UN troops in Haiti, including introducing the ongoing cholera epidemic? Statistics are staggering: nearly a million Haitians afflicted as of November 2014; nearly 9,000 have died. That doesn’t include the nearly 500 who died in the Dominican Republic when the disease spread, as epidemics are wont. And the worst of it is the UN refuses any culpability. What kind of “peacekeeping” force is that?

Now today we hear that UN troops–far from being a peacekeeping force–joined Haitian riot cops against protesters demanding democratic elections & the removal of president Michel Martelly & prime minister Laurent Lamothe. You can understand the Haitian desire to remove those two bums when you know Martelly is a former death squad member & the both of them collaborated with the two Clintons to set up Haiti as a sweatshop nation (& most likely rigged the election that Martelly won). Now the worst part is that UN troops didn’t just interfere in Haitian politics but they opened fire on the protesters. Once again, what kind of “peacekeeping” force is that?

It’s hard for the UN to hoodwink the Haitians who have protested for years at the UN mission in Port-au-Prince for the withdrawal of the violent so-called “peacekeepers.”

One could ignore the MoveOn petition if the group weren’t tied to the Democratic Party (DP), which helps set pro-Israel policy in this country. The petition should be considered a pernicious sneaky-assed DP campaign to win support from Palestinian solidarity activists for military intervention against Palestinians. It would be difficult for the US Pentagon to send troops if Israel is ever threatened but with the cover of “peacekeepers” UN troops could serve as proxy–just like they do in Haiti, the DR Congo, & several other countries.

There is no foreign military solution to Israeli occupation & ethnic cleansing in Gaza & the West Bank. Building the economic & cultural boycott (BDS) of Israel, building the solidarity movement, demanding “No military aid to Israel” is the mission of Palestinian solidarity.