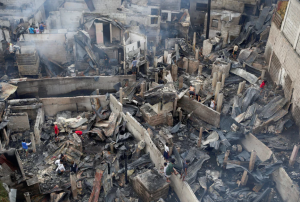 This is a slum fire today in the Bicutan district of Taguig city, which is part of metropolitan Manila. Residents are gathering in the still smoldering debris to recover what is salvageable of their belongings. There are no reports on the fire except that officials report 60 shanties were burned down & 150 families made homeless. Is there a problem with the fire investigation or were two or three families actually living in each shanty?
If the elevated Manila Skyway didn’t cross over Bicutan we wouldn’t know much about fires in the district. But the frequent fires cause major traffic delays so motorists tweet reports & photos to alert other motorists to take another route. That’s how we know that fires in Bicutan have happened several times a year going back to at least 2010. Often the motorist doesn’t know what’s on fire; other times they report it as a market, warehouse, factory, or slum fire.
From their reports, we can identify that of the ten fires in Bicutan just in 2016, four were slum fires. Today is the first in 2017. But slum fires in metropolitan Manila go back over three decades with the introduction of neoliberal economic policies in the Philippines. In the past several years they have escalated due to resistance by slum residents to forcible eviction & homelessness. This has now made Manila one of the most fire prone cities in the world.
Real estate & construction magnates have made a killing under neoliberal economics in the Philippines. Eleven have become billionaires off the real estate industry. The Philippine Supreme Court cleared the way in 2008 by mandating public lands be privatized to build business districts, office towers, upscale retail & restaurant space, high end condos, & headquarters for multinational corporations in on the plunder.
The slums built on public lands have to be cleared by every means necessary to acquire the land & remove any eyesores that might offend the upscale clientele now occupying the high end condos. Torching has become the quickest way to do that.
Housing is a human right.
(Photo by Erik de Castro/Reuters)