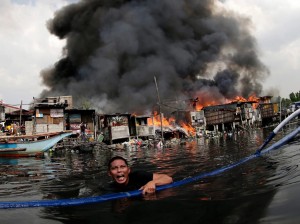 This young man is fleeing from a slum fire on Wednesday in Parañaque city, a suburb of metro Manila, Philippines. Fifty shanties burned down & 150 families were made homeless. There have been several fires in Parañaque city over the past few years, including several just this year; there have been at least four in the past 6 months. Hundreds of families have been left homeless & with no public housing most simply move back to the site & rebuild.

There are hundreds of slum fires every year in dozens of countries since one billion people now live in sprawling urban squatter colonies of makeshift housing. Fire forensics are seldom reported but fire officials routinely cite a list of causes including faulty & pirated power lines, inflammable building materials, gas tank explosions. Residents usually claim arson & criminal negligence by municipal authorities & the locations of slums in areas targeted for gentrification & development renders the claims of arson not just credible but likely.

Every year, 240,000 rural residents, displaced by the IMF model of agribusiness plantations, move to Manila–making it the fastest growing city in the world. The World Bank reports squatters now comprise 40% of 12 million Manila residents. They are mostly unemployed or part of the informal economy & live on USD$1.00 a day or less. They live along waterways (including Manila Bay), railroads, around garbage dumps.

There are many Philippine laws, including the 1987 Constitution & historic heritage laws, which prevent the sale of public lands for commercial or industrial purposes. USAID is consulting with the Philippine agency tasked with privatizing public lands to overturn or dodge these restrictions to gentrification. Clearing public lands of slums is preparation for private developers to move in.

In 2008, the Philippine Supreme Court authorized the Manila Development Authority to demolish all “illegal structures & dwellings” along all waterways connected to Manila Bay & ordered it over & done with by December 2015. The court ordered authorities to clear out the shanty residents with no relocation guidelines established. President Aquino & other government minions have made it clear they intend aggressive action to clear tens of thousands of squatters & to relocate them to the rural areas they originally fled from to find work. One government official said he had received orders from Aquino that “If push comes to shove, we will have to blast those houses.” Or burn them down.

Slum residents, fishers, health, church & environmental groups are organizing themselves against privatization of public lands & government aggression, including taking to the courts to fight the encroachments & violations of human rights & Philippine law. Their efforts make clear resident concerns about arson are not misplaced or paranoid. The rate of arsons is certainly accelerating to meet the December 2015 deadline set by the Supreme Court.

These arsons for purposes of gentrification must be exposed & opposed in Brazil, the US, Bangladesh, India, Nigeria, the Philippines, Nepal. & elsewhere. Housing is a human right.