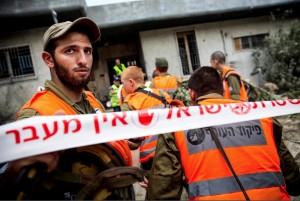 Once again in the interests of journalistic integrity (an antiquated, romantic notion taught in high school journalism courses but found inconvenient to media), we post this photo of alleged rocket damage in Ashdod Israel, about 23 miles north of the Gaza border. We say alleged because we can see no evidence of any damage whatsoever.

These guys are from Homefront Command, a division of the Israeli military, & the caption says they’re cleaning up rubble from a Hamas rocket in this front yard. Now let’s get real: if there was significant damage in Israel, it would be all over the front pages to counter the impact of the hundreds of photos of massive destruction in Gaza. And if there was any real damage in this front yard, they wouldn’t stick soldiers in front to obscure it; they’d have the family out there weeping over their lost flower bed. Is it that those home-made jobs coming out of Gaza are no match for that multi-billion dollar Iron Dome system? Or are there really not that many rockets to contend with?

Why is it that every photo of Hamas rocket damage in Israel (out of four or five that exist) are taken from long distance & never actually show the rockets? Is this another version of people in Sderot cowering in bomb shelters when cameras show them sitting in lawn chairs watching ethnic cleansing like a ball game?

There is one reported death in Israel, allegedly from a Hamas rocket, but the deceased was serving as an adjunct to Israeli troops at the Gaza border; he was operating in a war zone. It should be noted, there isn’t a single other soldier death reported in this slaughter because the military aggression goes entirely one way.

When Israel claims it bombs mosques, disabled rehab centers, homes, apartment complexes, schools in congested areas because they’re harboring Hamas rocket launchers, they turn propaganda into farce. One doesn’t have to know squat about rocket launching & military operations to know you cannot launch long-distance rockets from a studio apartment or prayer room & expect it to get past other buildings obscuring its path.

Protests in defense of Gaza continue around the world. If you cannot join a picket, join the economic boycott of Israeli goods (barcode beginning 729); support the cultural boycott of Israel; demand “No military aid to Israel!”