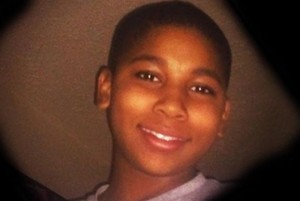 This is 12-year-old Tamir Rice who was fatally shot by Cleveland police in November 2014 while playing in a park with a toy gun–what media refers to as “brandishing a replica gun” to make the crime less odious.

A grand jury refused to bring charges against either of the two officers. The prosecutor, who set up the case probably to create that eventuality, said there were a series of mistakes that led to the shooting but no criminal culpability. It was just an unfortunate accident.

Accidents do happen, including to well-trained policemen. But when these accidents keep happening between Black youth & police officers in cities around the US, they move beyond unfortunate mistakes to patterns of oppression.

People around the US have been protesting & demanding accountability. The family has filed a civil suit but nothing will compensate for the loss of this young boy except justice.

Our deepest condolences to the family of young Tamir. May he RIP.‪#‎BlackLivesMatter‬.