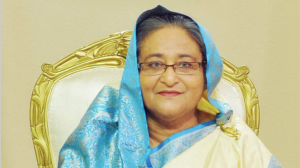 Bangladesh prime minister Sheikh Hasina will be visiting Pope Francis in Vatican City on a trip to Rome from February 12th to 14th. She’s going there at his invitation & also to attend a UN meeting on agriculture.

Hasina is on a full-throttle campaign to legitimize the forced deportation of Rohingya refugees & what better person to help her than Pope Francis? He cries crocodile tears for refugees while he sold Rohingya victims of genocide down the river by refusing to even utter the name “Rohingya,” let alone protest the genocide, while dining with Suu Kyi & the generals in Burma. He waited until he said a mass in Bangladesh before he made a hero of himself in his own eyes & an object of pity even to world media by saying “Rohingya”–like it was a brave thing to do rather than a pathetic gesture while a genocide is going on. No possible harm could have come to him by standing with the Rohingya people rather than the genocidaires. That wasn’t cowardice. It was collusion.

When Pope Francis talks theology, no one butts in with criticisms. That’s his venue of authority. But when he talks politics (including against women’s rights)–or more aptly, when he stands mute as a tree stump during genocide–he does not represent all Roman Catholics but just the Vatican & he needs to be excoriated as sharply as any other politician.

Hasina is not going to the Vatican to get a blessing or hear Pope Francis say “Rohingya” again. She’s going to get his endorsement for the forced deportation of Rohingya refugees which he will support in the most florid & detestable way. What the hell would Jesus say at such betrayal of the oppressed!?