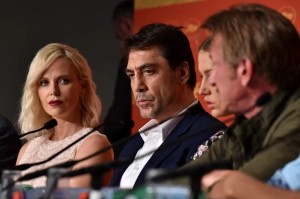 Reviews are in from the Cannes Film Festival of director Sean Penn’s “The Last Face” starring Charlize Theron & Javier Bardem. You can tell from their faces here at the press conference that things did not go well for the film which was greeted at the festival with derisive laughter & booing.

The film is about a romance between two white aid workers in war-torn Liberia–Theron as the director of an international aid agency & Bardem as a relief aid doctor in a setting of refugee camps. As the Guardian-UK reviewer described it, “African conflict is aphrodisiac for white people in Sean Penn’s crass romance.”

The film was mocked & pilloried by reviewers as white savior genre so despicable & artistically bereft it became camp & so racist it had no meaningful role for Africans except as pitiable backdrops to two white people getting it on. It is considered a major disaster, a cinematic nightmare by all reviewers.

A film bombing out is not news. What is interesting about this film bombing out so ignominiously is Sean Penn’s political role as a white savior in Haiti after the 2010 earthquake. He marched into Haiti playing the great white knight in tow with Bill Clinton (who was stealing the country blind from millions donated for relief), Hillary Clinton as US Secretary of State, former Haitian dictator Jean-Claude Duvalier, & Haitian president & former death squad member Michel Martelly. Penn used his celebrity & liberal reputation shamefully to facilitate their criminal efforts to take advantage of the earthquake to turn Haiti into a sweatshop haven–& to repress political opposition to those schemes.

Penn has been feted from here to Kingdom Come for his so-called humanitarian work in Haiti when he is nothing but a low-level sniveling shill for sweatshops & white supremacy.

This tawdry white supremacist film bombing out serves one purpose very well & that is to expose the racist posturing of Sean Penn. May he fry in hell for all eternity for his crimes against the people of Haiti.