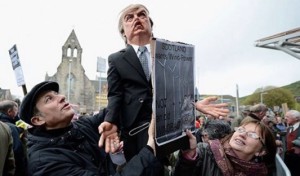 575 thousand people have signed a petition to ban Trump from entering the UK. He can’t be banned from the US because of citizen rights but a committee has formed to investigate alleged ancestry from trolls in the Black Forest which could invalidate his residence anywhere on planet Earth. Through clever morphing the Betty Windsor clan was able to broker that same ancestry into a dynasty but we can nip that Trump thing in the bud. The petition is a promising start to disgracing another fascist troll.

Re-posting this from April 2012 when Trump was fighting Scotland over wind farms to set up golf resorts. They burned his effigy. Way to go Scotland!

Now here’s a story just chock full of belly laughs because it involves one of the biggest buffoons on the planet: Mr. Donald Trump. Followed by his entourage of sycophants, our man stormed into the Scottish Parliament yesterday to testify to the committee on renewable energy against a wind farm of 11 turbines to be built offshore near a £750m golf resort Trump is having built in Aberdeenshire, Scotland.

Now we all know full well why he wouldn’t want wind anywhere near that coif of his but the main objections he voiced were aesthetic & xenophobic: wind turbines he pouted, are “horrendous”, “monsters”, & made in China. He responded to questions in the bullying & omniscient style for which he is regrettably known since he certainly isn’t known for his intelligence, wit, or insight. (We understand he watches Charlton Heston reruns to channel Moses but only comes off like a schoolyard bully.)

It’s difficult to make politicians look intelligent but in contrast to our man, the Scottish ministers disported themselves splendidly & must have had a barrel of laughs doing it. When asked what evidence he had to prove his assertion that wind farms destroyed tourism, he responded, “I am the evidence”, & when told that most Scots polled favored wind farms, he answered no one knows more about polls than him, that he knows more about the effects of turbines than any expert, & that he’s also an expert on tourism with “many, many awards” to his name (probably from tourist boards & chambers of commerce hoping to snare his bucks).

Trump claims he had a sweetheart deal with a Scottish politician who he’s now had a falling out with–testifying at once to the corruption & good sense of that politician. He ended his vituperations threatening to pull out of the deal & move his operation to Ireland if the Scottish Parliament doesn’t get cowed by his wrath. (Ireland, you better hope our man gets his way or you’ll have to contend with all this too.)

Two groups of protestors greeted Trump outside the Parliament: the first was assembled entrepreneurs hoping for concessions at the golf resort. The other were environmentalists holding up this effigy & a sign saying, “Scotland wants wind-power, NOT an old wind bag.”