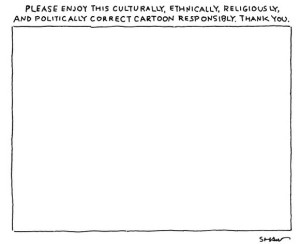 The victims aren’t yet buried nor the suspects apprehended but the tsunami of backlash crescendoes. There are many questions involved in this barbarous episode including not just Islamophobic cartoons in a country persecuting Muslims but also the character of art–in this case cartoon art.

Art is not sacrosanct nor artists immune from social responsibility. Political cartoons reached apotheosis with Honoré Daumier skewering politicians in 19th century France & bottomed out in “pickaninny” caricatures of Black infants in 20th century America under Jim Crow. The difference between them is striking because the former is satire & social criticism & the latter is hateful propaganda.

Political cartoons by their very function exaggerate what they are skewering. Daumier’s contempt for French politicians is undisguised but his caricatures are not grotesque. Pickaninny caricature has sweet-faced infants suspended by one arm over a crocodile pit.

The Civil Rights & women’s movements of the 1960s-1970s threw cartoon art for a loop because new sensitivities were required. Many cartoonists have let their consciousness lag behind their art form which means a good share of caricature is unusable by progressives if you want to post on political figures like Obama, Clinton, or Netanyahu. They’re too racist, misogynist, antisemitic. And many cartoonists continue to mask social hatred behind caricature–like the sweet-faced infants in Jim Crow “art”.

This cartoon is from the recent The New Yorker magazine. Is the cartoonist proclaiming the death of cartoon art without the possibility of vulgarity, over-sized noses, & giant breasts? Because Daumier did thousands of caricatures subtle in their skewering, devastating in their critique, & damning of their venal subjects. Just saying.

(Cartoon from The New Yorker)