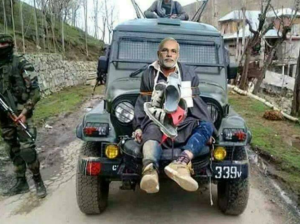 Not everyone appreciates the power of irony & sarcasm but satire is the genre of the oppressed. The same genre in the hands of the elite is nothing more than cruelty. The oppressed use ironic juxtoposition for reversing & flouting power relationships. That’s demonstrated by the April 2017 incident of an Indian counterinsurgency officer who tied a Kashmiri civilian to the front of a jeep & paraded him around, allegedly to deter stone pelters. The humiliation of the young man was more to the point than deterring stone pelters & he reportedly remains devastated by being plastered all over international media in such a humiliating way. Within a few months of the incident, with all the sensitivity of a bull in a China shop, an online business venue run by a member of the BJP (Modi’s party of Hindutva nationalists), began selling tee-shirts with a drawing of the incident & a message that read “Indian Army: saving your ass whether you like it or not.” There was also a Bollywood movie released a few months ago titled “Baaghi 2” which glorified the incident. When challenged about the tee-shirt, the guy who sold them online said it was so Indians could wear their patriotism on their chests & as a warning to Kashmiris. Now how do you think those patriots would respond to this photoshop job, replacing the young Kashmiri with Modi, if it were plastered all over a tee-shirt & sold on line? Would they laugh as heartily? Or would they be enraged at the insult to their supreme leader? Irony speaks for itself.

(Photoshop was posted by Salute Kashmiris)