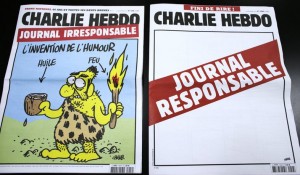 This seems to be an era of exposé when old certainties are laid bare as pipe dreams & heroes are exposed as shysters. UN officials are accused (& not for the first time) of covering up sexual assault of young boys by UN troops from France in the Central African Republic & in fact threatening to fire the aid worker who blew the whistle. The whistleblower, a senior UN official, has been suspended for handing a report to prosecutors detailing the rape & sodomy of starving, orphaned, homeless boys by troops who were supposed to be protecting them.

Human rights groups are exposed for corporate & government ties (& even as fronts) that control their politics & make them accessories to the crime of occupation & plunder in so many countries. Now PEN America, the writers group that always seemed to stand for freedom of expression, is embroiled in a controversy for offering their courage award to Charlie Hebdo at a May 5th forum in NYC. They might regret the exposure they are getting for this massive political blunder.

On its website PEN justified its choice by saying “Only a handful of people are willing to put themselves in peril to build a world in which we are all free to say what we believe” but Charlie Hebdo has done that. How much courage does it take to publish hateful caricatures of Muslims, Arabs, Africans in Paris when the French government has made wearing the veil in the public streets illegal & street goons harass Muslim women with impunity? When it’s witch-hunting & deporting Roma? When vigilantes are torching or attacking mosques? When the regime is involved in letting thousands of Africans drown in the Mediterranean? That would make Charlie Hebdo part of the gestalt of social hatred that seems to be thriving in France–not rebels against it.

There doesn’t appear to be any democracy in how PEN selects the honorees since already 35 members have objected & are boycotting the ceremony. Wasn’t the membership consulted or asked to vote? Did they all just get a tweet inviting them to celebrate racism?

What could explain PEN America’s fall from grace? One could vet the politics & connections of the entire board but most of them are just well-remunerated writers with no probable connections to nefarious organizations. Checking the money sources is a quicker way to identify who controls the decisions. And here we find PEN America is “partnered” with (that means bankrolled by) a few governments, including the Dutch & British & several private enterprises. They’re “partnered” with UNESCO, the European Commission, & several foundations of undetermined politics–except for the Open Society Foundations of George Soros which is involved in passing out hush money to immigrant rights groups in the US & trade unions in countries like Zimbabwe. The purpose of the hush money is to sit on social protest & make sure it doesn’t happen. So let’s be frank! If PEN America is accepting dough from Soros, they’ve sold their soul to a hefty bidder. And they don’t stand for squat anymore.