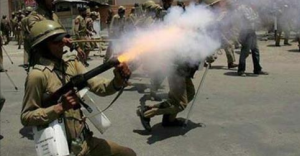 Surely someone at some time has elaborated the politics of satire since ridiculing repressive power is as old as class society & one of the richest parts of literature.

Many don’t take to it & think it trivializes oppression. You can’t fault people for lacking a sense of humor or disliking sarcasm. It’s so universal a genre that sarcasm & irony must play a psychological role in our ability to manage overwhelming grief & terror. It’s a way of bringing power down to size. But it’s also more than that. It’s a weapon to expose the cruelties & idiocies of power.

This article is from the website & FB page called “Dapaan: Incredible News from Kashmir” which says it is strictly spoof & satire: “There are no facts here, only fiction. If something here resembles any facts or reality, it is only because fiction tends to do so often. And if something makes sense over here, that is because news no longer makes sense. Maybe that is why we are here.”

After the Modi government announced a panel to discuss non-lethal weapons to replace non-lethal pellet munitions, Dapaan published a brilliant takedown titled “India to hold ‘referendum’ for weapons of choice in Kashmir.” According to the article, India will “empower Kashmiris to choose the weapons the state can use on them.”

“We will ask them what they prefer, death by bullets, blinding by pellets or burning by chilli grenades, & many other options like stink bombs, stun grenade, tasers, microwave. It is for them to choose, we have no dearth of choices to offer.”

That doesn’t trivialize barbarism so much as express contempt & defiance which is the very heart of freedom struggles.