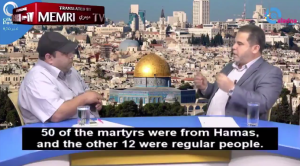 One stands aghast at the public TV interview of Hamas political bureau member Salah Al-Bardawil claiming that 50 of the 62 Palestinians shot in cold blood at the Trump embassy massacre were Hamas supporters. His comment in Arabic is being translated by media around the world as Hamas operatives, fighters, armed terrorists. He didn’t bother to clarify that even though he played directly into the hands of Israeli propagandists & the justification by governments & media around the world for shooting down unarmed Palestinian protesters. Israel, Zionist bloggers, & media are having a field day with this. Didn’t he see that coming?

Our man Al-Bardawil probably would have claimed all 62 for Hamas were one of them not an 8-month old infant & the other eleven teenagers. He sits on television shooting his fat mouth off when he was most likely sitting at home out of the line of danger. Otherwise, what can explain his absolute political bankruptcy or his inability to grasp the art of defensive formulation? Even if it were true that fifty of those young men killed were Hamas supporters, one would hope he had the political savvy to explain that they had every right to support the political parties of their choice, just like elsewhere in the world. In fact, he probably has no idea what their political sympathies are other than their demand for refugee rights, opposition to occupation, & their demand for self-determination for Palestinians. Mostly, he should have emphasized that whatever their political ideas, those young men shot down in cold blood were unarmed.

Hamas, whatever their politics & political failings, should throw him out on his ass. Or at least keep him from shooting his mouth off for all the world to hear. He has no right to jeopardize unarmed Palestinian protesters now & in the future. For the first time in 70 years, there was a turning of the tide for Palestinians because so many finally saw that Israeli snipers were shooting at Palestinians like fish in a barrel & targeting youth without mercy. The video & photo documentation was irrefutable & it was all over world media. Now Al Bardawil, talking out his ass, puts that new understanding in jeopardy, allowing some to retreat to blithering about Hamas terrorism rather than denouncing Israel for genocide–& they can claim they got it directly from Hamas. Palestinians deserve a better leadership than this & it is found in the trade unions, civil society groups, & activists who called & administer the Boycott, Divestment, & Sanctions (BDS) movement.

(Photo is screenshot of Al Bardawil shooting his mouth off)