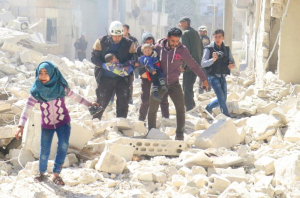 Russian airstrikes on Idlib were in the same time period as the US airstrikes on the mosque near Idlib. The Pentagon said the airstrike on the mosque killed “several terrorists” which is Russia’s justification for carpet bombing civilians. Coincidence or coordination?

It appears the counter-revolutionary alliance between Syria, Russia, & the US to destroy the Syrian revolution against dictatorship may be emerging from the shadows, exposing Assadist propagandists & the Hands off Syria Coalition as cold-blooded agents of dictatorship.