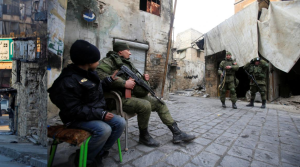 The Russian Defense Ministry reported that it deployed troops to clear explosive devices in east Aleppo. They’re actually present in Aleppo as an occupying army but they do have to demine thousands of buildings & public roads to make it habitable because of their use of cluster munitions in over one year of bombing the city.

Cluster munitions, which are dropped from warplanes or fired in rockets, contain hundreds of small explosive devices the size of an apple that spread over large areas indiscriminately & are designed to explode upon impact. But unexploded ordnance, including cluster bombs, bullets, shells, grenades, & land mines, often do not detonate, are buried in rubble or the ground, & continue to maim & kill long after, even decades after their deployment. There are millions of unexploded ordnance in every country subjected to military attack by US-NATO & Russian warplanes.

Russia & Syria deny the use of cluster munitions in east Aleppo because they are banned in international law but there is photographic & video documentation along with testimony from Syrians being bombed with them.

The photo is Russian soldiers on foot patrol in east Aleppo. Presumably assault rifles are not used for demining but to enforce occupation.

End Syrian, Russian, & US bombing of civilians in Syria. No foreign military intervention. Out now.