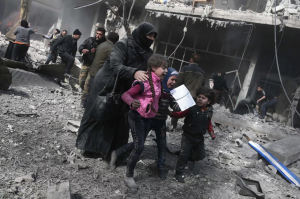 Eastern Ghouta, Syria: this is war using rockets & barrel bombs against unarmed civilians. It is a war to defend the Assad dictatorship, not a war against paramilitary terrorist groups as Assad propagandists claim. There are 400,000 civilians in Eastern Ghouta now coming under aerial & artillery assault. Just in the past four days, 250 civilians have been killed & over 1,200 have been injured, including hundreds of children. This woman is running for cover, trying to get the kids out of the field of Syrian bombers.

The only principled demands are for the immediate cessation of Syrian, Russian, & US coalition bombing of civilians & for the immediate, unconditional withdrawal of all foreign military forces from Syria.