The Roman Catholic Cardinal of Burma, Charles Maung Bo having an affable meeting with the architect of the Rohingya genocide, General Min Aung Hlaing on August 21st, 2017. At the same time, five other Catholic bishops from Burma were meeting with military officials to discuss “all inclusiveness & cooperation for the political affairs & peace making process,” as the General’s office reported it.

This meeting may be four days before the current genocidal offensive began but it was only seven months since the last one ended in a campaign that has been going on for years. Pope Francis cannot whimper out believable protests against this genocide or expressions of sympathy with Rohingya refugees if he does not rein these prelates in with denunciations & threats of excommunication. The last time the Catholic Church colluded in genocide was Rwanda & before that Germany. If Pope Francis doesn’t speak out against the blatant collaboration of Burmese prelates in genocide, all disclaimers about his role in Argentina’s Dirty War are open for reexamination & he can stuff his papal bulls where the sun don’t shine. What is the difference between Cardinal Bo & the Grand Mufti of Syria who signs off on torturing & hanging political prisoners? 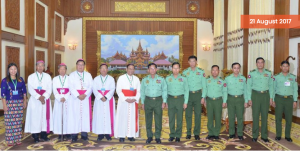