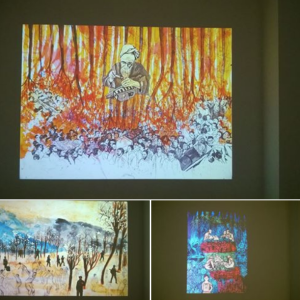 Rollie Mukherjee’s art works were part of the Srinagar Biennale in Basel, Switzerland from April 12th to 15th. Not only is her work due such honor, but because the motif is the occupation of Kashmir, her presence in the exhibit will bring an understanding of the occupation that only art can bring. When her work was shown in Srinagar last year & honored by Kashmiris, that is the honorific most valuable.

Several years ago, I saw an exhibit at the Boston Fine Arts Museum by Hawaiian artists. Until that exhibit, I knew nothing about the violent US colonial conquest of Hawaii, the diaspora of dispossessed Hawaiians, or the ongoing struggle against the conquest. Because art is so powerful, the criminality against the Hawaiian people portrayed in the works was overwhelming & I began studying the US conquest. So like the Hawaiian artists, the honor accorded Rollie’s work demonstrates the role of the artist in political movements.