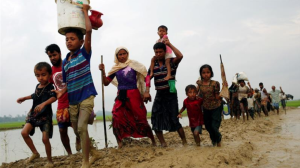 Rohingya Vision, one of the most reliable sources of information about the Rohingya people & the genocide against them, reports:
– More than 7,500 people in Arakan state have been executed & the bodies of many were burned or hidden.
– 70% of Muslim villages have been destroyed by fire & demolition, their contents looted & lands seized.
– Hundreds of women, girls & minors have been raped & murdered.
– More than 500,000 people were forced to flee to Bangladesh to escape the army & Buddhist nationalist death squads working with the army.
– All possessions of jewelry, money & cattle were confiscated from fleeing refugees.
– More than 35,000 children are without their parents & without guardians.