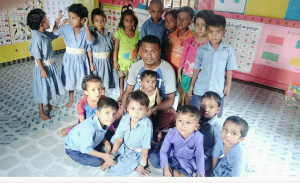 These are Rohingya kids in Kutupalong Refugee Camp in Bangladesh. Thirteen-thousand refugees from genocide in Myanmar live in the camp. The man in the middle is Mohammed Imran, an elected refugee representative at the camp.

An investigation of the widespread persecution & genocide of Muslims would almost certainly expose direct links to British & European colonialism. It is beyond dispute in the genocide against Rohingya in Myanmar. Unraveling & elaborating that historic connection is an important part of ending the violence & damage of colonialism–which is by no means historically defeated but is emerging in the form of neoliberal capitalist economics.

Racism is not inherent to human nature. The ideology of social inferiority is a political contrivance, coming fairly late in human history, to justify slavery, colonialism, massive inequality. “A People’s History of Science: Miners, Midwives, & Low Mechanicks” by Clifford D. Conner is one very good source that explains the origins of the ideology of racism. That rancid creed that afflicts all of humanity in one way or another was developed in German universities. It doesn’t come full-blown out of human DNA.

Racist persecution continues because it has become integral to the world economy. Capitalism is built on it & could not survive without it. Racism is so irrational that its strength can only be measured by the value it returns to those who would be gods in how they run this world. Every struggle of oppressed people against racism, casteism, persecution is a struggle of all humanity for a world free of such monstrosities.

What purpose does genocide of Rohingya serve the military & their entourage of nationalist Buddhist thugs in Myanmar? The answer to that needs elaboration, especially after the end of colonial rule. But judging from recent comments by Aung San Suu Kyi to Obama, to the UN General Assembly, & to media, the Burmese generals in collaboration with the IMF, World Bank, multinational corporations & investors have their eyes set on “development” in Arakan State where the majority of Rohingya live. That means land grabs, ethnic cleansing, cultural devastation (i.e., neoliberal plunder) just as it means all over Africa, South Asia, Latin, Central, & North America.

For working people, racism is not measured by the value it returns but by the damage it inflicts on our children–whose happiness & well-being are to us the only value worth consideration.

End the genocide of Rohingya in Myanma