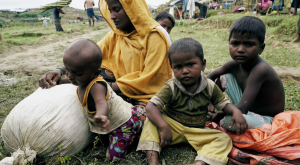 This mother of five survived the massacre in Tulatoli, Arakan state but her husband & a son were both killed. She said she saw with her own eyes the dead bodies of about 300 small children & 200 young women about her age. She managed to escape with four of her children with the help of her brothers. As she made her escape she saw children hiding in paddy fields. The military caught them, put them flat & drove knives into their chests & stomachs, then threw their bodies in the river. She got separated from her brothers but she & her four children made their way to Bangladesh with villagers from a neighboring town. Now she faces the perils of an impoverished widow with orphans in a country where she has no rights.

PS Shafiur Rahman is trying to raise funds for a documentary about the Rohingya. He has been chronicling their struggle for a while & is playing an important role now in educating about the genocide. If you would like to contribute for the film, please contact him on Twitter at Shafiur Rahman @ Shafiur