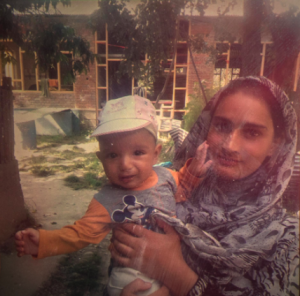 This is a cell phone photo of 18-year-old Saima Wani taken by her younger brother shortly before she was shot in the head on January 24th in a hunt to kill operation by Indian security forces chasing down two young militants, one of them her brother Sameer Ahmad Wani. She died on Saturday after 18 days on life support. Her brother Sameer & his associate Firdous Ahmad, both recent recruits to militancy, were executed on the spot since due process is no part of military occupation. Seventeen–year-old Shakir Ahmad Mir, who lived nearby & may have been among those protesting the military operation, died hours later in hospital from bullet injuries. Twelve-year-old Musharaf Fayaz picked up an unexploded shell from the hunt to kill operation after troops left without clearing the area of unexploded ordnance. He brought it home to play with & it exploded, causing massive head injuries. He later died in hospital. Another 20-year-old girl who suffered a bullet wound in the head is still recovering in hospital.

Saima Wani’s funerals prayers were attended by so many thousands of mourners that funeral prayers had to be repeated. As Ather Zia has expressed it: “mourning is resistance.”

Our deepest condolences to the Wani family who have now lost two of their beloved just in the past few weeks. Saima & Sameer have a sister & brother in addition to their parents. May both martyrs Rest In Peace after a life struggling against occupation & for freedom.