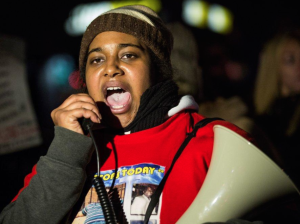 Erica Garner died this morning of a massive heart attack. She was the 27-year-old daughter of Eric Garner who was choked to death during an NYPD attempt to arrest him for selling untaxed cigarettes in 2014. NYPD policy prohibits the use of chokeholds. After his death, she became a prominent & outspoken activist against police brutality.

She leaves two small children, including a boy born in August 2017, her mother, & five siblings.

May she Rest In Peace.