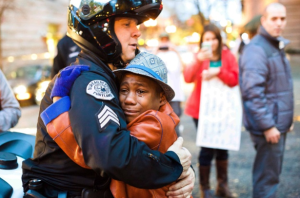 It’s an embarrassment to see the occasional image of protesters canoodling with the cops like they were just fine fellows in a bad spot. The canoodling is meant as a gesture of camaraderie but in fact it’s evidence of apolitical touchy-feelyism. Cops lob tear gas & stun grenades at protesters, beat on them with truncheons, deny them rights protected under the Bill of Rights. Cops directing traffic are one thing; cops at protests are there for no good purpose & are not our friends.

So when this photo of a kid at a Portland, Oregon rally about Ferguson hit the wires apparently many who think racism is just a personal matter, a privilege theory thing, felt the cockles of their hearts glow. Those with any good sense & an understanding of the systemic nature of racism were sickened. Because these protests were about the shooting of an unarmed Black kid by a killer cop & about the hundreds of Black teens shot down or stopped & frisked by racist cops. This is not a moment for warm & fuzzy fraternity.

You can imagine the relief, if not also disgust, to learn that 12-year-old Devonte Hart, was set up, manipulated into this fraudulent scene. The Portland Police Department recognized the potential for this image & dispersed it round the globe. They also attacked protesters just hours later. So much for touchy-feely crap.

Protesting racist injustice is serious business. Over the decades, many Black activists have died at the hands of cops. It’s nice to want to get along with everybody but save the canoodling for the church picnic.