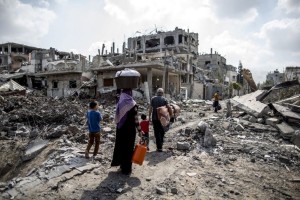 Most countries who want to prove their peaceful nature don’t call on testimony from military generals whose expertise is war. They especially don’t appeal to generals from US-NATO because those 14 years of barbarism in Afghanistan are something of an impediment to credibility. But Israel is sweating bullets over a possible UN criticism for war crimes in Operation Ethnic Cleansing last summer & is stooping to political burlesque.

They induced a group of retired generals & politicians, including the head of the NATO Military Committee, to come to Israel for a week to work up a report to the UN testifying that Israel used extreme precautions to “adhere to the laws of war & to protect Palestinian civilians” during 51 days of bombing.

The expenditures in booze & prostitutes would have cost Israel a bundle but the whole burlesque was bankrolled by the Friends of Israel Initiative (FOII), a Zionist group which is openly Islamophobic. The group was founded in 2010 & is led by former Spanish prime minister José María Aznar, a real prize package politically with long family roots in Spanish fascism which he continues to water. Both father & grandfather served in the Franco regime; his regime posthumously awarded an honorific to a torturer & head of the secret police under Franco.
Aznar spent millions of public funds for a US law firm to lobby for a Congressional medal for himself. We can let such venalities pass. We can even overlook his rejection of anthropogenic climate change–even though he believes those who accept it are “enemies of freedom.” He isn’t the only politician to talk through his butt about that. But we cannot ignore his support for the 2010 assault on the ship Mavi Marmara by Israeli commandoes. The Mavi Marmara was part of the Gaza Freedom Flotilla bringing humanitarian aid to Gaza in an attempt to break the Israeli blockade. Nine Palestinian supporters were killed & many injured.

Enough with the burlesque! The rubbish about extreme precautions for civilians is completely belied by hundreds of photos from Operation Ethnic Cleansing & by testimony from Israeli soldiers & veterans in the group Breaking the Silence.

It isn’t that Israel is stooping low in allying with generals & right-wingers associated with fascism; it’s that kind of crowd where Zionism finds affinity. That is certainly not the vision of freedom from persecution held by most Jews.

Building the economic, cultural, & academic boycott of Israel is not just to support Palestinians in breaking the shackles of Israeli apartheid. It has the potential to free Israelis from the shackles of Zionist social hatred.

(Photo of Gaza after Operation Ethnic Cleansing from the Independent)