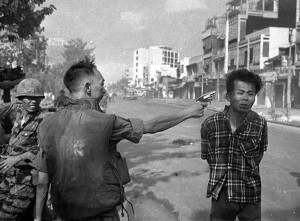 It’s been 41 years since the Vietnamese defeated & sent the US military packing in April 1975, But for millions of antiwar activists around the world who went through that war it will always remain one of the most wrenching political experiences of our lives. It signaled the end of illusions about our government, dealt a mighty blow to the racism that justifies war, ended (until after 9/11) years of films & propaganda glorifying war under the banner of democracy, & overcame the political repression of the McCarthy era of the 1950s.

It was a glorious experience too for being rid of the nationalist hatred & militarism we were bred on & for being part of an international antiwar movement. In the US alone, there were protests of over a million people & there were massive protests all over the world.

The Pentagon changed strategies after Vietnam to overcome what they considered the affliction of the “Vietnam Syndrome,” a resistance by Americans to US wars. Antiwar activists around the world consider it not an affliction but an achievement of their movement. It has eroded & weakened over time, but it has not yet been decisively overcome or, regrettably, mobilized in opposition to current wars.

The US engaged in many war crimes in Vietnam. It was one of Henry Kissinger’s killing fields. The US continues to engage in war crimes in all its wars. Abu Ghraib & Guantanamo are part of standard operating procedure for the Pentagon & CIA.

This infamous photo from the Vietnam War was taken February 1, 1968. The chief of the South Vietnamese national police is executing a suspected Viet Cong leader. Due process is no part of war–he might have been Viet Cong; he might just as well have been a Vietnamese man who opposed the US occupation. The South Vietnamese national police performed routine law & order work but were mainly a paramilitary counterinsurgency force operating all over South Vietnam which was allied with & occupied by the US. Descriptions of them read very much like the character of Indian paramilitary forces in Kashmir.