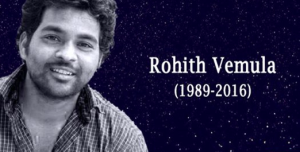 Reposting this eulogy of Dalit activist Rohith Vemula who committed suicide on January 17th, 2016 as a tribute to his life & to the leadership he gave the struggle against caste oppression:
******

It’s been two years today since Rohith Vemula took his own life. The loss of someone to suicide is a grief filled with questions that cannot be answered, confusions over what might have been, guilt and recriminations about who’s at fault and what could have been done to prevent it, if only we’d known. In the end, it was his decision long in the making that he, “a glorious thing made up of star dust,” as he so beautifully described human beings, could not live without the freedom of spirit he needed so burdened was he with the dead weight of inequality.

We may grieve for a very long time but we have to trust he understood something about himself that he would not let others see: “My birth is my fatal accident. I can never recover from my childhood loneliness. The unappreciated child from my past.” That spiritual melancholy he expressed so poignantly is the isolation and humiliation of oppression, of being disrespected and looked down upon for who you are. It is human beings, so strong and yet so vulnerable, who bear the weight of social and political inequality which devour the soul & sometimes exhaust the psychic energies to resist them.

He was a man keenly sensitive to nature, human love, pain, life, death, and the distinctions between the sincere and artificial. The sensitivity and insight are what made him a fighter and yet kept him so vulnerable. Oppression weighs heavier on some, on the thinkers, the ones who care about others the deepest. But for himself, he felt empty and believed in others more than he believed in himself. He gave others respect because he knew its value and its power and probably never understood his own. Those are the confusions that come from inequality.

No one holds education in greater esteem than the oppressed, not as a matter of status but of empowerment, and there are remarkable stories of the lengths the oppressed have gone just to learn. Intellectual aspirations are discouraged, often mocked, and always made difficult to achieve by those in power. That’s why in US history, it was newly freed slaves in the south who first introduced free public education available to all.

Rohith was a naturally intellectual person, curious and eager to understand. University officials probably well understood that about him and detested that in him, which is why they took away his stipend and suspended him. It was the place they knew he was most committed and therefore most vulnerable. That makes them culpable in his death. He was an embodiment of what Gramsci awkwardly called the “organic intellectual.” His intellectual commitments derived energy from being oppressed and from identifying with his caste. His unique ability to educate and inspire others was because he did not place himself above them nor seek to rise above others but only to rise with the oppressed to end inequality once and for all.

We shall always regret the choice he made in death though we trust he knew best when he had reached the limits of his endurance. We wish we could tell him we would never judge him selfish, stupid, or a coward as he thought but will always honor the choices he made in life to stand resolutely against inequality and thus be part of ending it.

When asked what could Rohith Vemula possibly mean to an American socialist and activist the answer is, the same as he means to Dalits and other oppressed castes. He was one of ours, he stood with us, fought for us and with us, believed in our capacities to change the world. For that we honor him. May he Rest In Peace, at one now with the star he came from.