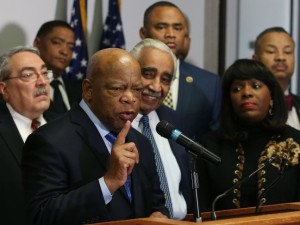 It’s not in the official history books of the US Civil Rights Movement nor certainly is it reported in media, but the Democratic Party (DP) pulled the same maneuver with that movement as it did with the women’s movement: it’s operatives worked tirelessly, often ruthlessly, to railroad independent political action into the death grip of the DP & turn it into an electoral apparatus rather than an activist movement. The DP succeeded–& the civil rights movement ended long before it had achieved solid ground in ending racist oppression.

Uncompromising Black activists allied in the Black Power movement were hounded by FBI & police. Many ended up in jail on frame-up charges; some were outright murdered; some fled to other countries.

One of those who moved seamlessly from leadership of the Civil Rights Movement to the DP was John Lewis, a Democratic US Representative from Georgia since 1986. Lewis became chairman of the Student Nonviolent Coordinating Committee in 1963; was a Freedom Rider; spoke at the 1963 March on Washington where Martin Luther King, Jr. gave his “I Have a Dream” speech; led the demonstration known as “Bloody Sunday.”

Lewis has a chest full of medals from his service to the DP, including the Presidential Medal of Freedom from Obama He belongs to the Congressional Black Caucus, & sits on important Congressional caucuses–like the one on road safety & another on COPD, the lung disease. Talk about taming a tiger!

His service to the republic is primarily keeping Black voters within the political stranglehold of the DP: making sure they register to vote but making damn sure they don’t protest. Though he played a leading role in the Civil Rights Movement, his response to Black Lives Matter has been primarily to chide them to ‘understand the way of peace & nonviolence’.

There’s no record of opposition by Lewis when the Clinton presidency continued the so-called “war on drugs,” which was always a war on the Black community, especially the youth–to prevent any re-emergence of civil rights activity. Martial law was employed in the Black community & thousands of young Black teens were executed or ended up with life sentences for smoking marijuana. But not a peep out of our man Lewis. Was he too busy monitoring road safety & making the lecture circuit on COPD?

Now Lewis has entered the presidential campaign to endorse Clinton. He’s sure to be rewarded lavishly for that & might even end up on the board of the Clinton Foundation. But to reap that munificence, he had to lie through his teeth–which is probably old hat for him now. He actually stood before media & said he’d never seen Bernie Sanders in the Civil Rights Movement but he had seen both Clintons. Talk about degrading yourself for a little largesse! But of course, once you sell your soul, it isn’t worth much any more.

Far be it from principled political people to endorse Sanders as president because he marched for civil rights in the 1960s. But Lewis is making an ass of himself by claiming that he, as a central figure in the movement, remembers who he did & did not see in crowds of thousands of civil rights protesters. The Clintons were unknown entities–especially in progressive circles & the social movements. They were elitists who functioned politically as elitists & shunned political protest.

In the 1960s, Hillary was still in her Barry Goldwater period. Goldwater was a US senator who called Martin Luther King, Jr. a “demagogue,” opposed the Freedom Rides & sit-ins, & voted against the 1964 Civil Rights Act, calling it a dire threat to Blacks that would create a police state. Goldwater was called “a hopeless captive of the lunatic calculating right-wing extremists” by baseball legend & civil rights activist Jackie Robinson. MLK, Jr. said if Goldwater was elected, the nation would erupt into “violence & riots, the like of which we have never seen before.” So at what point does Lewis claim he saw her marching for civil rights? Did he recognize her after she became first lady?

Photo is John Lewis with members of the Congressional Black Caucus at press conference endorsing Clinton.

{PS: Lewis never saw me either, but I was there.}