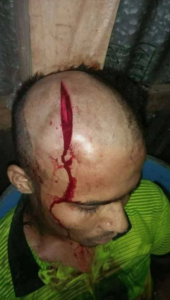 A report from Rohingya refugee & activist Ziaur Rahman on the renewed violence by the military against Rohingya in Arakan (Rakhine) state, Myanmar:
*******
#Rohingya are under attack again in Maungdaw.
#Pray4Rohingya

Maungdaw: Burmese Brutal Regime once again accelerated crimes against humanity like slaughtering Rohingyas along with extremist Rakhine (Moghs) on 26th June, according to suffering locals.

In the tragic incident military, BGP, Luientein along with Moghs arrived in the village of Kyambong (Kyun Pauk Pyu Zuu) village of northern Maungdaw from 3-4 different directions in small groups of 10-20 at 8: 00 AM right immediately after the Eid Prayer.

Later they raided the entire village, rounded up the women and interrogated them about their men, whom fled to jungles due to fear of brutal regime and their inhuman torture.

The raid became a human made catastrophe when they starting haunting men in the jungles, where they slaughtered 6 Rohingyas. Local fear of other 4 more men to be slaughtered in their custody in lying position.

Following that they tortured and injured any Rohingya they find leaving villagers in extreme fear and misery. Details of the slaughtered victims and the missing are yet unknown.

According to locals and the situation in Arakan (Rakhine ) Burmese Authorities are once again trying to create an unrest in Arakan following their genocidal countdown on Rohingya since the rule of the Burmese Regime in Myanmar.

(Photo of Rohingya man attacked via Ziaur Rahman)
Image may contain: one or more people