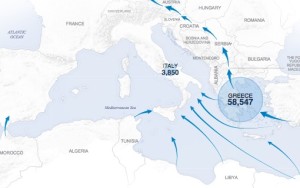 The UN refugee agency (UNHCR) has been keeping a daily count of refugees in the Mediterranean. FRONTEX, the EU policing agency against immigrants & refugees, also keeps a count but admits it’s completely unreliable. On Friday, the UN agency said 50,668 refugees had entered Greece so far this year; today they report 58,547–almost 8,000 people more in two days. The drowning toll is now 309 people, including children.

Now here’s what’s curious: the number of refugees from the north African coast to Italy hasn’t changed in that same time. What’s more curious is that the number has remained steady at only 3,850 people. So little information, so many questions. Like how has FRONTEX stopped the movement of refugees from Africa? Are refugees still drowning on that route? What about the refugee centers on Lampedusa & Malta? What about those trying to cross to Spain from Morocco? Has the Spanish government’s new security law clamping down on democratic rights & on refugees put an end to that movement of refugees?

Shouldn’t the UN refugee agency be more forthcoming, more informative? Maybe they don’t give a damn about those refugees, but we do.

(Photo is graphic from UNHCR chart)