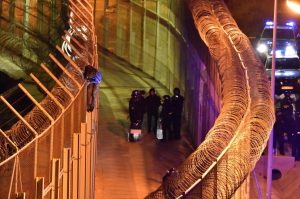 There has been a general news blackout about the refugee crises in the Mediterranean for about a year. There were always three major routes covered: from Turkey to Greece, from Libya to Lampedusa, Italy, & from Morocco to Ceuta & Melilla, both Spanish enclaves on the North African coast.

The Morocco to Ceuta & Melilla route used to receive a lot of coverage because of dramatic photos of hundreds of refugees scaling the heavily-guarded razor-wire fences whilst being beaten back. They would arrive in Morocco from African countries further south & encamp near the fences to wait out a chance to cross. Their encampments were often hassled & broken up by Moroccan security forces. Morocco police, in collaboration with Spanish border guards, would also attack refugees from the rear as they attempted to cross the fences. If any refugees made it across into Spanish territory they could file formal procedures for asylum under Spanish law. That’s why refugees employed the tactic of rushing the fences en masse with the hopes that more would be able to successfully cross. Many landed in Ceuta or Melilla with broken bones, lacerations & gashes from the razor wire, & other serious injuries because many were malnourished & sick to begin with.

There were frequent reports of excessive use of force & abuse by Spanish border guards, including summary returns to Morocco without asylum procedures. In just one out of countless incidents of excessive force, in February 2014 border guards fired rubber bullets & tear gas at refugees attempting to swim past barricades from Morocco to Ceuta. Fifteen died in that incident & they have not yet received legal justice.

On July 1st, 2015, Spain’s new Citizens’ Security Law went into effect. It was the government’s attempt to end massive, frequent protests against the EU-IMF austerity policies by criminalizing public protests. It was a draconian, very comprehensive attack on civil liberties, including internet access, protests, prohibitions on taking or disseminating photos or videos of police officers (including by reporters), exorbitant fines for insulting an officer (with broad definitions of “insult”), crackdowns on freedom of the press.

The security law also included the right to preempt international law & change Spanish asylum procedures by mandating the summary deportation of refugees who managed to cross the barriers & get into the Ceuta & Melilla enclaves. One can only imagine the extremes of violence employed by Spanish & Moroccan border guards against the refugees in order to enforce the new law.

This photo is of an incident yesterday, the first time Ceuta or Melilla has been covered by media in at least a year—almost certainly because of the new legal restrictions on media coverage of police actions. About 1,100 refugees in Morocco attempted to rush the fence at Ceuta but the combined security forces of Morocco & Spain managed to beat them all back & arrested 800. Only two managed to get across & both were taken to hospital for serious injuries. On recovery they will be deported.

One of the young men not yet arrested can be seen here at the top of the fence on the left; he shows how extremely dangerous it is for them to cross. From repeated photos taken of the fences over a few years, we can see they not only doubled up the fences but reinforced them all the way down one side with razor wire.

UN refugee agency figures for the number who managed to cross to Spain in 2016 are oddly reported. It’s unlikely many managed to cross or were given asylum if they did. That will require some investigation to find out.

Meanwhile, immigration is a human right. Refugee asylum is international law, not to mention part of the highest traditions of human civilization. Open the damn borders.