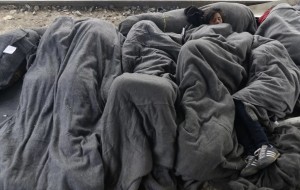 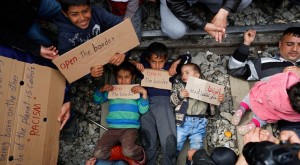 Refugees (who the Guardian-UK now refers to as “refugees & migrants” to sanctify the EU distinction between refugees from war & those fleeing sweatshop economics) are sleeping on train tracks to block train traffic & protesting in other ways at Idomeni, Greece near the border with Macedonia.

They’ve also held several rallies laying with their children on the tracks demanding Macedonia reopen its border which is now completely sealed. Banners read: “Open the borders”; “I’m child & might not know much, but I believe treating people disrespectful for being born on the other side of the planet is called: ‘RACISM”; & “We are humans, not animals”.

Estimates of how many are stranded at the border vary from one source to the next, ranging from 6,500 to 20,000. But of course, tens of thousands more are stranded on the Greek islands, mostly in detention camps. Two weeks ago, Greek officials estimated the number of refugees trapped in Greece at 44,000 & said by next month it could increase to between 50,000 & 70,000. Of course, they expect NATO operations in the Aegean Sea to reduce the flow of refugees by 70 percent. (Will they start torpedoing the plastic dinghies? Or just picking them up & deporting them back to Turkey?)

The UN refugee agency (UNHCR) & Frontex estimates don’t jibe but about one million refugees have entered Greece since January 2015 through today. According to the EU statistics agency (Eurostat), in 2015 alone, the EU accepted about 700,000 asylum applications from Syrians, Afghans, Iraqis, Pakistanis, & others from the Middle East. Many of these were declined, many were or will be deported.

No one expects demented trolls like run the EU to be good at math, but if you factor in 2015 asylum applications; assume falsely that 96,000 refugees who entered Greece in January & February 2016 got past the Macedonian border & 24,000 got left behind; & that the 20,000 who entered this month could not proceed because the border was closed in early March, then you have 44,000 refugees trapped in Greece. That leaves about 180,000 refugees unaccounted for.

Dimitris Vitsas is the Greek official coordinating this whole fiasco-cum-atrocity for the EU. He’s been quite blunt that the border to Macedonia will remain on lockdown, that most refugees will be living in detention centers-cum-concentration camps for at least two years while being processed for deportation. But of course he hopes this can be accomplished speedily “without recourse to force.”

Italian officials are now fortifying their coast on the Adriatic Sea across from Albania in case any refugees try to take that route out of Greece.

Immigration & human rights activists need to chart an international course of action to demand: Immigration is a human right. Open the borders.