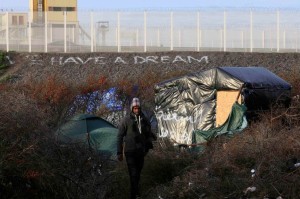 This fellow is a refugee stranded for now in a squalid encampment in Calais whilst waiting to find a way to the UK against an obstacle course of dangers & violations of international laws governing treatment of refugees. The refugees are in a hell of a spot. Couldn’t be worse. In common parlance, it would be said their condition is akin to being up to their asses in a swamp filled with alligators.

But on that embankment topped by a razor wire fence they’ve posted the message, “We Have A Dream.” And there you have it! There you see what it is about the human race that is so remarkable & why so tenacious against adversity.

The transformation will come when human beings no longer endure adversity but rise up en masse to overcome it. Suffering is not our due. It isn’t hedonism to say all human beings have a right to health & happiness. It is justice. But ‘Aye, there’s the rub!’ Social transformation is the hardest thing of all. Not impossible, but requiring the commitment of all against such massive & entrenched inequality.

Changing the world isn’t just one act but the steady drum beat of resistance to tyranny around the world. For now it requires opposition to war & occupation, support for refugee & immigrant rights, standing with all those oppressed in any way for any reason. Those who fight back with tenacity–like the Palestinians–lead the way forward for all.

Our respect to the refugees at Calais for making a banner that all of us can fly: “We Have A Dream” that someday the human race will create a world suitable for children to come of age in, to live & love in