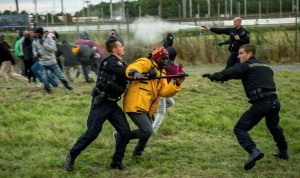 The ferocious EU assaults on refugees move from the Mediterranean to Macedonia to Serbia to Hungary to Calais. Here French gendarme/thugs are attacking unarmed refugees with truncheons & pepper spray near the Eurotunnel site at Calais where they are trying to cross into the UK. The refugee camp is called “the new jungle” with a racist insularity & stupidity that boggles the mind.

Whither France of the great democratic revolution against feudalism, of the 1968 revolution? Racism is now so structural to neoliberal capitalism that it has left no country uncorrupted. If refugees are not defended as brothers & sisters, if there is no mass opposition to this reactionary dynamic, all of society will pay the price in repression. It’s a case of chickens coming home to roost.