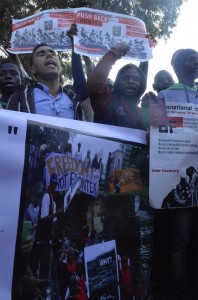 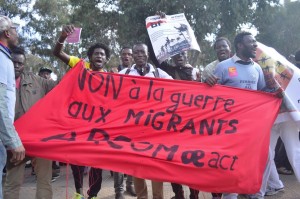 There has been a substantial news blackout about refugee movement on the Libya to Italy & Morocco to Spain routes. Both routes have been militarily repressed for nearly a year by Frontex naval operations involving warships from several European countries. The EU really doesn’t want us to know what they’re up to–how they’re intercepting dinghies, how many refugees have drowned, what they’re doing with those they intercept & “rescue.”

The demographics done by UNHCR show that nearly 50 percent of refugees from African countries are men & boys, 34 percent are children (including unaccompanied minors), & 20 percent are women. We also know from Europol that Italian authorities have lost thousands of refugee children after processing them for asylum–very likely handed over to traffickers.

It’s a gruesome story that needs to be investigated & told so that human rights & immigration rights activists can respond.

In my investigations (which are not ready to report), I came across a Moroccan immigration rights group & this protest they organized on February 6th in front of the Spanish embassy in Rabat, Morocco to protest the deadly border policy of the European Union. A year earlier, a planned protest at that embassy site had been criminalized & banned by the police. Four-hundred people, including activists from Moroccan & various sub-Saharan organizations, & refugees attended the protest which included tributes to friends who had died attempting to cross the sea to Europe. The banners & slogans demanded EU, stop the hypocrisy & open the borders; freedom of movement; Frontex ferries for all;

After the protest, they held interviews on radio & television & gathered for a conference where women & men from Morocco, Gambia, Mali, Cameroon, Senegal, & other countries discussed immigration rights.

Supporting refugee/immigrant rights means forging international links with groups around the world doing defense work so that coordinated actions can be organized.

Pity is the last thing refugees need. Solidarity is a very different thing than sentimentality & demands an active commitment to human rights.

(Photos are from Feb. 6th refugee rights protest in Rabat from FB wall of No Borders Morocco.)