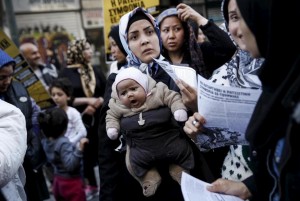 This woman with her infant is an Afghan refugee at a protest in Athens, Greece against the closures of borders across the Balkans. Afghans make up over 20 percent of refugees on the Turkey to Greece route but in an arbitrary decision the EU is excluding them from asylum. The EU is improvising its treacheries as it goes along, with Merkel & other officials running around like chickens without their heads, bribing, cajoling, threatening.

The EU uses the false distinction between war refugees & economic refugees to deny tens of thousand asylum. Since Afghans have been subject to war & foreign occupation for 40 years there is no legitimacy, even by EU illegal & immoral standards, to denying them asylum.

Of course, at this time, the borders are sealed up tighter than a drum to all refugees & they are being subjected to inhumane living conditions in Greece. Afghans are put in concentration camp conditions so squalid that Doctors Without Borders (MSF) withdrew so as not to be implicated in the barbarism. The UN refugee agency also withdrew mostly so they can turn a blind eye to what the EU is doing.

Greece has long had an active immigration rights coalition that monitors anti-immigrant violence & legislation. Some of the activists are at this protest in Athens. But the frequent protests both in Athens & at Idomeni near the Macedonian border appear to be driven largely by refugees themselves demanding “We are humans & we have rights. This is why we are here today & we will keep protesting until the borders open.”

A video from media showed an aggressive confrontation between riot police & refugees at the border & said some refugees stepped in to to protect the police from angry protesters. Let’s get real. They stepped in to make sure the unarmed, hungry, exhausted, frantic refugees didn’t get their asses kicked by well-fed soldiers in battle gear.

The EU & Greece will soon attempt to forcibly remove refugees & given the deplorable level of organization for processing, will likely skip the civilities of international law & herd them like cattle for transport back to Turkey.

There needs to be massive international political work done in solidarity–from forums to protest rallies at embassies. Refugees have become scapegoats, with officials drawing from the cesspools of Islamophobia for justification. That is the historic role refugees have been consigned under capitalism which has led to the most backward & racist policies in all countries affected. One example in the US is the reactionary drug laws which target primarily Black youth. They were formulated as a form of social control almost entirely in campaigns against Mexican & Chinese immigrants as well as against Blacks immigrating from US southern states to the north. If we do not actively stand with them, we’re all going down together.