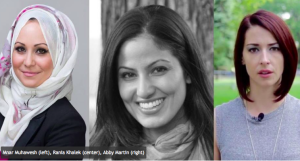 Rania Khalek, Abby Martin, & Mnar Muhawesh (from the discredited Mint Press), who are all apologists for the Assad regime, have been invited to speak next month at Oregon State University on Palestine, Syria, & Yemen. The student group hosting the event claims they are receiving requests to disinvite Khalek & Muhawesh.

Martin is no slouch either when it comes to support for Assad’s dictatorship so the group has probably been asked to disinvite all three. But then Assad supporters couldn’t post sensational headlines like this; “Oregon State student group stands up for Arab journalists amidst calls to disinvite them from event.”

Neither Khalek nor Muhawesh are Arab journalists any more than I am an Irish or German journalist just because my ancestors came from those countries. Both were raised & educated in this country & are American up to their hairy eyeballs. All three women are being challenged by those who do not want Palestinian solidarity tainted by anti-Muslim hatred, support for counter-revolution in Syria, & support for Syrian & Russian bombing of civilians.

Since both Khalek & Muhawesh’s schtick is playing the victim of an orchestrated smear campaign, it might be politically wiser not to object to their speaking but to have a picket line outside the event with flyers explaining the issues at dispute. Since the student group which invited them said it wants dialogue over differences, it might also be wise to organize an intervention that is not disruptive in any way but vigorously interrogates their Assadist apologia in the discussion period. Both of them are intellectually shallow & ignorant & can be exposed as propagandists with a respectful but informed interrogation.