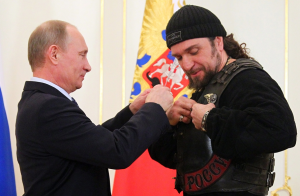 The things you learn by working up your courage to read corporate media:

This is Putin giving Alexander “The Surgeon” Zaldostanov, the prestigious Order of Honour, a Russian state medal in 2013. The Surgeon has been the leader of the Night Wolves motorcycle club since the Soviet era. Putin, a close friend of The Surgeon, often rides with the group.

The Night Wolves are a business enterprise that organize rock concerts, run tattoo parlors, have a clothing line, & put on patriotic motorcycle exhibitions. They are also a fascist group aligned closely with the conservatism of the Russian Orthodox Church & actively involved in Russian right-wing politics, especially to promote Putin’s foreign military operations.

In return, the Kremlin bankrolls the group to the tune of “several hundred million rubles a year.” The Russian opposition figure Alexei Navalniy posted evidence that in just 18 months between 2013 & 2014 the Night Wolves received over US $1.1million in Kremlin grants.

The Surgeon is a real non-conformist rebel in Russia combining capitalist competitive smarts with an ardent admiration for the politics of Joseph Stalin who he calls a “supreme historical & mystical figure of whom Russia’s enemies are still afraid, despite the fact he is dead.” He’s an outspoken nationalist who calls Western leaders “Satanists” bent on Russia’s humiliation. He is also a proud homophobe who rants against “faggots” & a misogynist who famously told Russian NTV: “We have to burn out all the feminism & homosexuality from our Orthodox Christian country with hot steel.”

Does anybody really want to stand with this guy? Can we hear some more rah-rah for Putin?

You can read more about this vile fascist creature in: http://www.rollingstone.com/politics/news/putins-angels-inside-russias-most-infamous-motorcycle-club-20151008